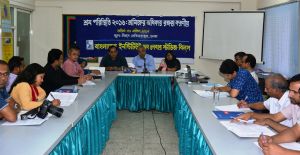 Labour Law related various issues ensuring workers protection and workplace safety were discussed in the seminar. Research reports on workplace death and injury due to accident and humiliation in 2016 and working hours and wages in five working sectors were presented in the seminar.

Additionally, 149 workers were died in road accident, where 34 were female and 96 were injured, where 12 were female workers.

A total of 237 labour unrest and labour movement happened throughout the country in 2016.