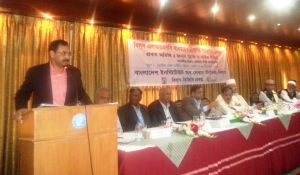 The Chief Guest said, “At earlier in our country workers movement and Trade Union leadership played a vital role for the nations’ need with sacrificed and patriotic spirits. He also said that it is responsibility of everyone and they should come forward to ensure fair wage, live and livelihood of workers. He added that workers-owners good relationship is necessary for ensuring economic development and national progress. He urged everyone to play vital role with patriotic consciousness for overall development of workers.

In the seminar speakers urged everyone to work together for establishing workers’ rights. They expressed their hope that BILS-DGB Project continuing activities will play important role to ensure workers rights in Chittagong.

BILS-Labour Resource and Support Center is basically the continuing process of building a complete Information Service Center by which enthusiastic everyone such as national and local Trade Union Leaders, students, teachers, news reporters and researchers will be benefited. The seminar was held aimed at assessing the short time activities of BILS-LRSC and making the activities more dynamic for coming days.