Workshop held on Finalizing and Submitting Charter of Demand 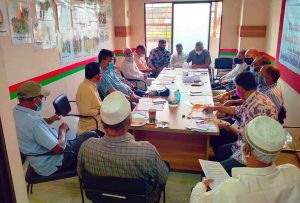 Following the government declared health restrictions amid the rapid rise of the Covid-19 situation in the country, BILS under its’ DGB-BW project organised a workshop with limited participation for finalizing the Charter of Demand on July 31, 2021 at LRSC, Chattogram.

The workshop was arranged in 2 separate phases on the same day. First, it was organized with the participants of the Railway sector, and then the second phase was organized with the participants of Construction sector workers.  The day-long workshop was presided over by BILS-LRSC Chairman A M Nazimuddin and  BILS senior officer Pahari Bhattacharjee acted as moderator.

The meeting reviewed the early drafted Charter of Demands for both the Railway and the Construction sector and added several changes as per discussion of the workshop participants as well as the senior trade union leadership.