Workshop held on elimination of gender based violence at workplace 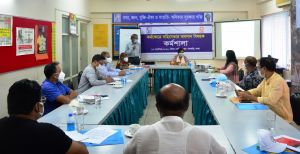 BILS with the support of CARE Bangladesh organised a workshop titled “Elimination of Gender based Violence at Workplace” on September 17, 2020 at BILS Seminar Hall with the participation of leaders of SKOP affiliated Trade Union Federation aimed at ending violence and harassment at workplace.

Main objectives of the workshop were to draw a consolidated action plan to mobilize the issue through a joint platform and to deal with the issue involving the consensus of all sectors both formal and informal.