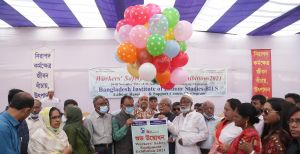 20 Stalls with Safety equipment, publications, and workers-friendly materials were set and ready for display for two days during the Fair. Citizens from all walks of lives, workers and trade union leaders, concerned organs of the government, CSO representatives were present in two days at various events.

The activities of the Fair included inauguration, Discussion on Workers’ Rights and Safety issues, Experience Sharing of injured Workers, display of Fire Extinguishing and other Safety Measures, Group and Panel Discussion, Cultural events, and concluding ceremony.

Major topics of Panel discussion in the Safety Fair were “Occupational Safety and Health of Workers in terms of Labour Law and Labour Rules”, “Prioritizing Safety Issues for Chattogram-based Workers”.

Speakers in the Safety Fair hoped that labour safety should be given utmost priority and labour law and labour rules should be properly followed by the employers in all sectors. We have to take all measures to save workers from unexpected accidental injuries and occupational hazards-all opined.