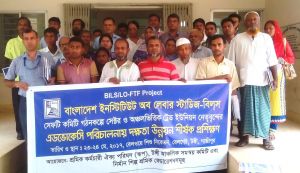 BILS organised a two-day training for capacity building of sector and area based Trade Union leaders on Formation and Carryout Advocacy for Speed-Up the Formation of Safety Committee aimed at area based collective action and formation of safety committee and developing the leadership skills for carrying out advocacy on May 23-24, 2017 at Railway Shishu Niketon of Tongi in Gazipur.

The training was organised for building capability of the participants to describe and explain the current situation of workers of Tongi Industrial area, the position and situation of Trade Union and its problems, challenges and strengths, to indentify the strategy and procedure to form area based safety committee for construction sector workers, to identify the topic and strategy for advocacy in favor of the construction sector workers, to implement advocacy with DIFE DIG at Gazipur.