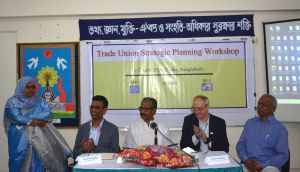 The main objectives of the workshop were to enhance skills and knowledge of National Centre of Trade Unions in better organising workers, formulating policies, and implementing programme at national level according to the trade union priorities, to facilitate National Centre in identifying and prioritizing challenges and opportunities for the development of a strategic plan and to develop a SMART action plan in line with global and national development framework and context. Issues of the workshop were Global Setting, Bangladesh Development Framework, Decent Work Country Programme, Freedom of Association, Social Dialogue and Industrial Relations. Participants of the workshop were members of NCCWE, representatives from women committee and youth committee, ILO representatives and officials from BILS.

In the opening session, Toumo Poutianen addressed on the Decent Work situation of Bangladesh. He discussed on the International Labour Organisation-ILO`s centennial activities for Social Justice & other International Labour Standards. In his speech he pointed out the role of functional tripartite social dialogue in the world of work, Role of Trade Unions in the future of work especially to the Youth & Women in labour market, role of TCC in policy level and collective voice of Trade Union in the future of work to establish rights of the workers. He mentioned about the ILO supervisory mechanism for improving workers’ rights and Trade Unionism. He told that the positive priority of the labour movement can improve the situation.

Shah Mohd. Abu Zafar mentioned about the new concept in the world of work, Automation, Job Change, Role ofnew generation workforce in the labour market. He emphasized on the role of TCC for Labour Laws & Policy issues. He also mentioned about the close relation of BILS, NTUC`s & as well as NCCWE to work collectively to combat future challenges of Trade Union Movement.