The country’s economic progress achieved through coordinated activities of the employers-workers-government: Mayor Nasir 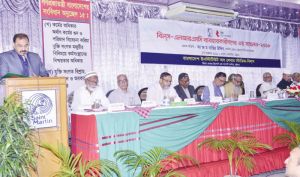 BILS-LRSC Users’ conference was held on November 17, 2018 at Hotel Saint Martin in Chittagong.

Chittagong City Corporation Mayor said that the government has taken various initiatives and activities for improving the livelihood of the workers. Government also has taken significant initiatives for the working people aiming to reform Labour Law including reducing child labour.

These initiatives should not be limited to formalities, workers and owners parties should be extended their helping hand to implement it.

Mayor said that, the country’s economic progress is achieved in coordinated activities of the employer-workers-government. In this case, participation of all parties in BILS activities, the organisation has played a vital role. He added that we all have responsibility for the development of the country. Positive environment will be created in case of economic advancement by doing our duties from respective position.

Labour leaders in the conference said that Workers’ deaths and accidents have become a regular casualty in the institutional and non-institutional, especially risky industries of the country. Due to inactiveness of government inspection department, negligence of owners-authorities, mismanagement and lack of adequate supervision, working in a risky environment, helpless workers are being killed one by one in accident. Now, it is time to demand to prevent workplace accident, to enforce Trade Union and Labour Law. Government should play an active role in this case, they mentioned.

It is to be mentioned that, in this day-long conference five workshop were held. Important recommendations were taken aiming to determine the future activities for the betterment of the workers.