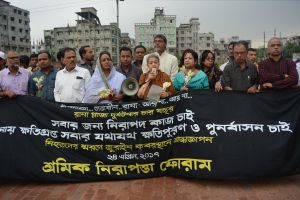 Recalling four years of Rana Plaza building collapse Sramik Nirapotta Forum-SNF with the participation of Trade Union leaders and civil society representatives paid homage to the deceased workers at Jurain Grave Yard in the Capital on April 24, 2017. Leaders urged all to be careful to prevent  such kind of accidents in future and to ensure workplace safety. In their reaction leaders said, despite of repeated warning for preventing accident and strengthening awareness, accidents are happening one after another.  Hundreds of workers are losing their lives in workplace accident like Tampaco Foil Factory fire, boiler explosions and other deadly workplace accidents.  They emphasized to ensure workplace safety and proper inspection and proper application of labour law.

Earlier on April 23, 2017 in the evening at 6:30 PM, SNF organized candlelight vigil in front of Savar Rana Plaza accident place recalling Rana Plaza building collapse and the victims who died in the incident. 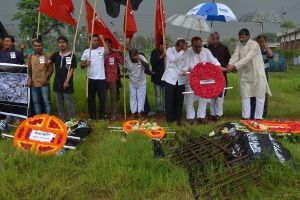