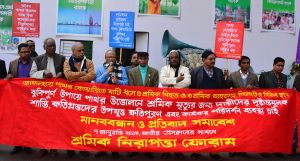 Sramik Nirapotta Forum organised human chain and protesting rally on January 7, 2018 in front of National Press Club regarding the incident of collapsing stone Jaflong in Sylhet where four workers including a woman worker were killed and three workers were injured and another incident of roof collapsing of an under construction building at Sripur in Gazipur in where a worker was killed and eight workers were injured.

Demanding the immediate implementation of High Court rule to stop illegal stone lifting for closing the death procession of workers in stone quarry leaders in the human chain said, workers are killing in one after one accident through the whole year. They said, the number of death workers in last year was 32 according to various news media sources. They also urged to protest workers death in construction sector.

Leaders said, “It is necessary to strengthen inspection system, security and protection at stone quarry immediately without any delay. Otherwise, risk and loss of lives of workers will continue to increase. Besides, they demanded fair investigation and taking necessary legal steps by local administration to implement Labour Law and responsible authorities of Department of Inspection for Factories and Establishment. They also urged to the concerned people for identifying the responsible people including the employer and bringing them under the law and providing appropriate punishment, providing compensation to the injured workers along with taking steps for the implementation of Labour Law immediately to ensure the security of workers all over the country.