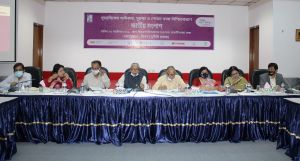 Officials of government and non-government organisations and leaders of trade unions and civil society said that area-based awareness should be raised to establish the rights and dignity of domestic workers after including them in the labour law. The speakers made the call at the national dialogue on ensuring the rights, protection and decent work of domestic workers organised by BILS Securing Rights Project at the CIRDAP auditorium in the capital on October 31, 2021.

Speaking as the chief guest, National Human Rights Commission Member Jesmin Ara Begum, said that the labour law should be amended to bring domestic workers under the protection of the law and to ensure recognition of their work. However, she said that not only the law should be amended, but also the proper implementation of the law should be ensured. She further said that due to lack of witnesses and compromise of the complainants in the cases of domestic violence, the cases are not disposed properly. She called for raising awareness in the minds of the people and said that not only the training of domestic workers but also the mentality of the employers should be changed.