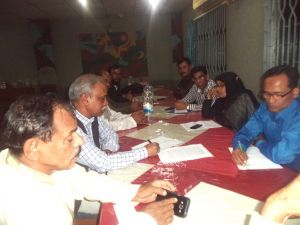 A report on BILS-LO FTF Project activities covering from January to November 2016 was placed in the meeting. It is to be mentioned that, under BILS-LOFTF Project, 14 major events were organised in Chittagong from January to December 2016, participated by thousands of Ship Breaking workers. It includes Human chain formation in case of ship yard accident, day observance, training program on capacity building, round-table discussion, lobby meeting with inspection department, campaign & advocacy team meeting, Meeting of TU Forum leadership and Committee etc.

Forum leaders, while speaking in the meeting said, due to the relentless efforts of NGO’s and TU organizations and Ship breaking workers Trade union Forum, nowadays, our workers are much more aware regarding workplace safety and TU rights. In some yards, workers are receiving personal protective equipment; they are getting legal compensation in case of accidental injury and death. But the pace of unionizing efforts is slow. Still thousands of ship breaking workers are yet to be unionized. However, the necessity of building stronger network among TU’s and NGO’s for the greater interest of Ship breaking workers were also discussed in the meeting. TU leaders suggested restarting the weekend/bimonthly training program for the ship breaking workers under BILS-LO FTF Project. They also emphasized on the capacity building training as well as advocacy and campaign related initiatives.