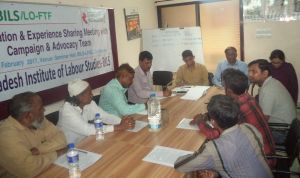 A meeting of BILS-Ship Breaking Sector Campaign & Advocacy Team was held at BILS Information & Training Centre, in Chittagong on February 1, 2017.

The meeting mainly focused on the previous activities of the campaign & advocacy team which includes awareness building campaign meetings, human chain formation programmes, workers rally and others such as day observation programmes.

It is to be mentioned that for providing workers Appointment Letter & ID card issue during October-November 2016, the Campaign & advocacy team was formed in a meeting and aforesaid programmes were undertaken to be implemented with in June 2017.

The participants at the meeting said, it is a common trend of Ship Breaking owners not to provide Appointment letters & ID card to Ship Breaking workers. In most cases, workers are financially and socially deprived because of not getting ID card. Workers face problem in labour court during filing case, when they do not have ID card. Even law enforcement agencies harass innocent workers as they fail to show ID card in some cases.

Later, a decision was taken to organise an awareness development meeting at Kumira, Sitakunda, in Chittagong onFebruary 17, 2017, where a total of 100 Ship Breaking workers are expected to attend.