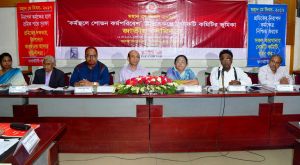 BILS, Karmojibi Nari and OSHE Foundation, under the management of Ministry of Labour and Employment jointly organised a seminar titled “Role of Safety Committee to Ensure Decent Working Environment at Workplace” on May 2, 2017 at National Press Club aimed at observing May Day-2017.

Giving highest importance on security, the Secretary of the Ministry of Labour and Employment said “Government has taken different positive initiatives along with amendment of labour law and formulation of labour rule. Emphasizing on Safety Committee formation and continuing its regular activities, he said, it is necessary to increase the number. If Safety Committee is not there then Department of Inspection for Factories and Establishments will not renew the factory license, he added. Besides, he emphasized on strengthening awareness on this issue.

Director General of the Department of Factories and Establishments said, “Ensuring security of building and electricity is possible if regular supervision of concerned authorities is ensured during construction of buildings. He also said, nowadays, safety of the factories is properly ensured. He mentioned, 39 risky factories have already been closed among 3780 inspected by Accord, Alliance and NTPA. He said, 5000 Safety Kits are being developed for increasing awareness and skill of Safety Committee members which will be supplied among different stakeholders in all factories.