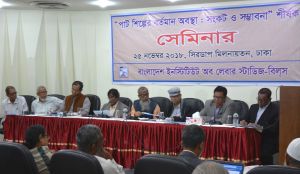 BILS organised a seminar titled, “Current Status, Crisis and Possibility of Jute Industry” on November 25, 2018 at CIRDAP Auditorium in Dhaka.

Speakers in the seminar said that, it is necessary to identify jute properly and its proper use must be understood. If the parts of the jute mils are not modernized like other industry, its economic potential will be reduced, they added. As well as explanation of the idea, speaker also advised to consider the capacity and growth in this regard. Urging the government to take an initiative to discuss in the right way of India’s antidumping; they said that the success of private sector will be used in the jute sector.

Professor M M Aksah said, considering the international market, we have to produce our products at affordable prices. In comparison to India our export of jute products has increased in the past six years. The market price should be determined considering these progresses. Right plans have to be taken on hand to survive the old factories. For this, we have to step down from BMRE and have to select the factory on priority basis. To implement the wage declared by the government, BJMC has to reap the loss again in case of providing double salary. So, concerned all including the government have to come forward to take correct measures by reviewing this for maintaining labour rights. If the productivity can make double then it can be possible to provide double wage, he said. Emphasizing on taking initiative of imposing a huge amount on rehabilitation of workers at dead factories he said, considering the balance of BJMC human resource will be reduced. He suggested reducing the burden of loan under its subsidies. He urged to remove existing corruption and nepotism immediately in case of buying raw jute.

Dr. Mubarak Ahmad Khan said, as jute gets a sufficient priority in Bangladesh, so Bangladesh has a complete ministry on jute. He mentioned, global market has realized the necessity to step down from using polythene while realizing the bad impact of polythene. Mentioning the necessity of adequate research to facing the challenge in order to cope up with the competition to synthetic and developing the products quality he said,
government should come forward. He also said that there is necessity to come forward for the utilization of jute like lignint and cellulose jute economically. There is possibility of using this type of jute in garment industry.

Shahidul Karim said that, there should be coordination in determining price. Due to the high production price, it could not catch the local market.

Dr. Khondaker Golam Moazzem said, government wants to create a market in the country. There is a need to make this potential. But the reality of all the mills that are closed have to be understandable. In this case, right decision should be taken considering debt, financial loss, reserves, arrears, and other related matters. He commented that, other closed jute mills which are under BJMC could be taken to build new factories.

BILS Advisory Council member Md. Asharaf Hossain said, despite many possibilities in the jute industry, it has been continuously deteriorated. In this case workers existence and rights should be considered.