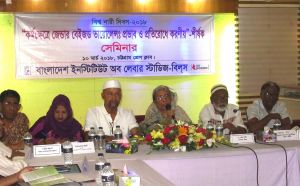 BILS, under its DGB-BW project activity, organized a roundtable titled “Gender Based Violence at Workplace: Impact and Role of Society” on March 10, 2018 at the Chittagong Press Club Auditorium.

Creating social awareness among all on the issue of gender based violence inside and outside of workplace was the main issue of the round table. BILS Project Coordinator Kohinoor Mahmood presented a key note paper on the topic named “Gender Based Violence at Workplace: Impact and Role of Society”.

The speakers opined that due to the lack of awareness, poor enforcement of law workers and common people especially women are being victimized every now and then inside and outside of their workplace.  Both GO NGOs and other stakeholders should take pro-active role and effective measures to stop violence against working women and children-they said.

Speaker in the rally mentioned that, without sensitive behavior towards women, protesting all types of violence on women, establishing legal, social and basic human dignity it is impossible to establish a progressive society as well as state.

After the rally a colourful procession moved on different areas of the city from Chittagong Shaheed Minar.