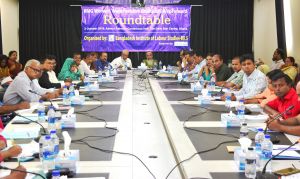 Bangladesh Institute of Labour Studies-BILS, with the support of Mondiaal FNV organised a roundtable titled “RMG Workers’ Wage Revision: Reality and Way Forward” on October 2, 2018 in Azimur Rahman Conference Hall, at The Daily Star Centre in the Capital. The roundtable was organised aiming to analyze the reality in the context of declared minimum wage of RMG workers and determining the future activities in this regard. 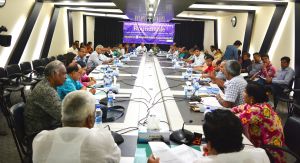 Discussants in the roundtable said that, in the present context this minimum wage at RMG sector is not appropriate. Basic wage was decreased to 51% in comparison with 67.69% in 2006. They opined that, this wage is comparatively low considering the national and International context. Comparing with ship breaking, tannery along with other sectors, minimum wage was not increased at RMG sector. It is necessary to take minimum wage at RMG sector in a standard level for achieving sustainable development goal, vision 21, 7th five-year plan and developing Bangladesh as a country of mid-level income, they added. It is necessary to focus the workers’ position to government before the final declaration of minimum wage, they disclosed.