Round table held in Chittagong on Human Rights Day 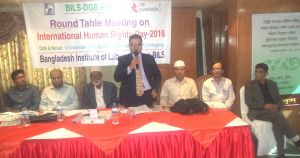 Addressing the meeting, Joint Director of labour at the Department of Labor Chittagong Md Gias Uddin said that workers should aware of their rights. They need to be united to raise their voice against deprivation.

Chittagong Labour Court Lawyer and Trade Union Leader Adv. Zane Alam said that human right is not about rules and regulation rather it is the right of human. In the country, workers are victim of different kinds of violence. In 90 % factories, workers do not get identity card and appoint letter which is the basic right of a worker.

Professor of the Department of Law at Chittagong University Dr Shaheen Chowdhury presented the key note paper at the round table.