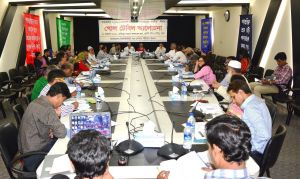 BILS organised a roundtable titled,”Labour Law 2018 : Expectations and achievement-Practicable of Parties” on October 7, 2018 at Azimur Rahman Conference Hall in The Daily Star Centre aiming to review the existing situation of declared Labour Law by the government and determine the activities to implement a time befitting Labour Law.

Discussants in the roundtable said that, workers did not get the desired result in the amendment of proposed Labour Law. In the Labour Law amendment the owners are benefitted but not the workers. The Labour Law should be amended in light of the decisions taken by the unanimous resolution of the Tripartite Consultation Council, they added. They also said that, Government has presented its position on Labour Law at international level and committed to remove obstacles to forming Trade Union through necessary corrections. But it is seen that, there are barriers in case of organising workers. While getting the news of forming Trade Union, owners keep the concerned workers under supervision and fire them from their jobs at a suitable time, they added. They opined, it is impossible to organise the workers until removing their fear of discharging from job. They said that, the workers who get appointment through the growing outsourcing are unable to participate in Trade Union. All workers at informal sector including agricultural and domestic workers have to bring under the protection of Labour Law.

Speakers also said that, Labour Law should be completely democratic according to ILO Convention 87 and 98. The wage discrimination among the government, private and EPZ workers should be removed, they opined. There should be a minimum standard in case of setting the compensation. In this case, loss of earning should be included. Speakers underscored, the discrimination of maternity leave between the government and private sector is not considerable. It is necessary to add a section on sexual harassment in the Labour Law. It is also necessary to bring the opportunity of forming Trade Union in newspaper in the Amendment, they added. BILS affliated and associated national Federations Trade Union Leaders, Labour Law experts, IndustriALL affliated Federations Leaders, representatives of national and international Human Rights organisations who work with Labour Law were present in the round table.