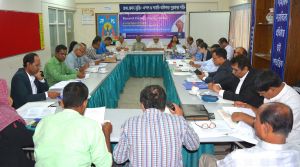 A research findings sharing meeting titled, “A Living Wage is Possible: Role from Brands/ Buyers is Important” was held on November 11, 2018 at BILS Seminar Hall. Sharing the research findings and taking directions from the discussants through an open discussion was the main objective of the meeting.