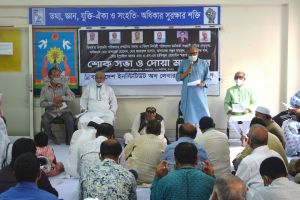 Recalling the late leaders at the meeting, the speakers said, they worked relentlessly for the welfare of the working people. Their deaths have caused irreparable damage to the trade union movement in nationally and internationally. They said working people will never forget their contribution. Mentioning that they led the movement for the protection of the rights of the workers in realizing various demands, the speakers said that the trade union movement should be taken forward keeping in view the history of their struggle. The leaders further said that the late labour leaders played an active role in their respective workplaces. They hoped BILS will continue to work for the welfare of working people in the way they showed. 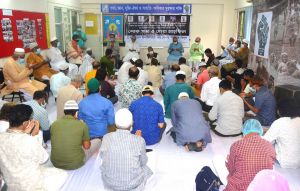 It may be mentioned that Late Md. Ashraf Hossain passed away on July 18, 2020. He was an internationally renowned labour leader and a leading activist of the jute mill workers’ movement, one of the organisers of the Freedom Fighters; He elected Member of Parliament in the 1979, 1996 and 2001 Jatiya Sangsad elections and served as the Whip of the Jatiya Sangsad from 2001-2006. He was also the 1st member of the National Executive Committee of the Bangladesh Jatiyatabadi Sramik Dal-BJSD and served as the Chairman of the Election Commission in all the elections of the federation. He was BILS vice chairman, former acting chairman, and honorary member of the advisory council.

Late Md. Zafrul Hasan died on April 6, 2020. He was internationally renowned labour leader, undisputed leader of Bangladesh Bidyut Sramik Karmachari Union, former member of the governing body of Public Services International-PSI. He also founded the Institute of Diploma Engineers-IDEB in 1970 and served as its 1st General Secretary, in 1978, he was appointed as the convener of the Diploma Engineers’ Shangram Parishad. He was retired from the active labour movement in 2014 as the General Secretary of the Bangladesh Jatiyatabadi Sramik Dal, and was the former Labour Affairs Secretary of the executive committee of the Bangladesh Nationalist Party-BNP. He served as a member of the BNP chairperson’s advisory council. He was the founder member of BILS and he was Joint Secretary General and Executive Director of BILS.

Late A.A. Mukit Khan died on May 22, 2020. He was an honorable member of the BILS Advisory Council, a lifelong labour leader, President of the Bangladesh Free Trade Union Congress-BFTUC and Founder President of the Building Construction Workers Union Bangladesh (INSAB).

Late A.S.M Hafizul Hossain passed away on May 16, 2020. He was a renowned labour leader, former president of the Power Grid Company Limited workers’ union, country coordinator and trainer of Public Services International-PSI, and Coordinator of the BILS Project.