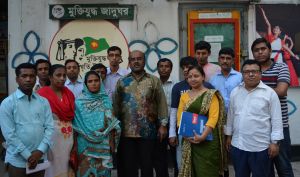 BILS, with the support of Friedrich-Ebert-Stiftung (FES) organised a regular thematic discussion meeting on youth leadership of national federations titled “ Working People Role and Contribution to The Liberation War” on November 30, 2016 at Muktijuddho Jadughar and Vanguard Office, Segunbagicha, Dhaka.

Main objectives of the meeting were to inform the youth leadership of national federations about the role and contributions of working people in Liberation War and to inspire them for Trade Union movement with the spirit of Liberation War.

BILS and SKOP affiliated leaders of different Union Committees were present at the meeting.