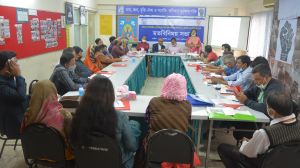 BILS, with the support of CARE Bangladesh organised an opinion sharing meeting with the participation of Journalists of various media on February 17, 2021 at BILS Seminar Hall, Dhaka.

The main objectives of the meeting were to inform the participants about ILO Convention 190 for elimination gender-based violence at workplace and to inspire them for reporting on this issue in order to raise awareness among the workers of all sectors and draw the attention of government for the ratification of this Convention.

BILS Director Kohinoor Mahmood explained the current situation of gender-based violence at workplace in Bangladesh. She focused on the number of violence and harassment occurred at workplace in 2020, various initiatives taken by government in order to protest this kind of violence. Regarding this she highlighted the necessity of the implementation of ILO Convention 190 and the contribution of Journalist to bring out the issue in the limelight. BILS Director Nazma Yesmin discussed about all the articles and areas of ILO Convention 190 where she mentioned several incidents as examples.

Some recommendations came from the meeting such as to reduce the level of labour exploitation, to define the working hour and ensure the issue of overtime of the workers, to expand the discussion through raising awareness, to involve media personnel more in this regard, to organise seminar and daylong training programme with the journalist in order to provide knowledge on ILO Convention 190.