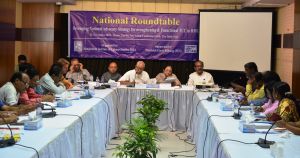 Taking recommendations from the discussants aimed at making TCC more effective and strong was the main objective of the meeting.