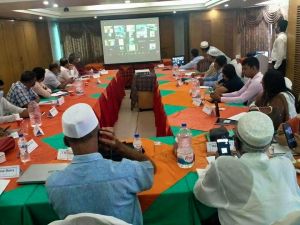 At the beginning of the meeting, the inaugural speech was delivered by JSL central vice president Md. Safar Ali. Later the aim and object of the consultation were narrated by BILS-DGB-BW project coordinator Kohinoor Mahmood. Then, BILS-LRSC activities under DGB-BW project phase of 2016-2018 and 2019-2021 were presented by BILS-LRSC senior officer Rizwanur Rahman Khan.

Leadership in the consultation meeting expressed their deep concern over the ongoing pandemic issue and illegal lay-off, job-cut, and forced termination in RMG and other sectors as the consequences of the Covid-19.

Most speakers expressed their hope and satisfaction over the result of the BILS-DGB-BW project activities and LRSC initiatives of last 5 years especially in terms of capacity building of the trade unionists, formation of new trade unions, submitting charter of demands, increasing trade union membership and project-related some other activities.

Chief Guest of the consultation meeting Nazrul Islam Khan expressed thanks and gratitude to DGB-BW and local trade union leadership for support and assistance in BILS activities over the last 5 years. He said, if we work all together, we can overcome many obstacles in terms of establishing labour rights.

Special Guest of the consultation meeting Indira Gartenberg expressed her experiences about working with Bangladesh and said it was positive in a greater sense. She thanked all for keeping continuation of implementing project designed activities amid Covid-19.

Central and local trade union leadership suggested to take initiative all together to stand beside the most vulnerable sector workers of Chattogram and the region and to take joint action in terms of eradicating barriers for forming trade union and establishing labour rights.