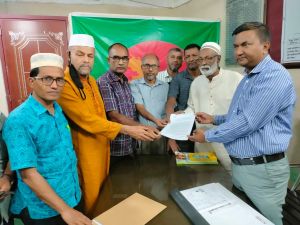 A lobby meeting with the Department of Inspection and Factory Establishment (DIFE), Chattogram was held regarding ensuring the workplace safety of workers on June 15, 2022. Later, a deputation was handed over to DIG, DIFE, Chattogram Abdullah Al Shakib Mubarrat on behalf of Sromik Kormochari Oikka Parishod-SKOP leadership and BILS officials of Chattogram with the support of DGB-BW.

It is to be noted that, a severe workplace blast and fire occurred at B M Container Depot, located at Sitakund, Chattogram on the night of 4th June 2022 in which 42 workers died and three to four hundred others got severely injured.

In the following days, the biggest TU alliance of the country Sromik Kormochari Oikka Parishod-SKOP leadership Chattogram with the support of BILS-DGB-BW went to see the injured workers at local hospitals, issued a joint statement to local dailies, and organized a press briefing on this issue on 13th June 2022 at Chattogram Press Club. Later, on 15th June 2022 the lobby meeting with the DIFE, Chattogram was held.

During the lobby meeting and handing over the deputation regarding the accident to DIFE, Chattogram DIG Abdullah Al Shakib Mubarrat, SKOP leadership, and BILS officials namely A M Nazimuddin of BJSD, Md. Safar Ali of JSL, Nurul Abser Bhuyan, and Abu Ahmed of BLF, Md. Mamun of BTS, Md. Mohinuddin of SLF, Rizwanur Rahman Khan of BFTUC and Fazlul Kabir Mintu of BTUC were present.

During the lobby meeting, SKOP and BILS leadership said that there is a massive responsibility of DIFE to ensure workplace safety. Negligence in it is needed to be found. They mentioned that apart from B M Container Depot, two other accidents happened at Sagorica Ship Breaking and H M Ship Breaking yard at Sitakund were 3 workers got severely injured and 1 died.  Container yards and ship breaking yards security in and around the city is, thus, now-a-days, at severe risk.

In the submitted deputation SKOP and BILS leadership claimed that workers of B M Container Depot and mentioned above ship breaking yards should be compensated as per ILO convention 121.

DIG DIFE Chattogram Mr. Abdullah Al Shakib Mubarrat received the deputation and discussed on the issue with SKOP and BILS leadership. He, on behalf of DIFE, assured to take necessary steps in this regard.