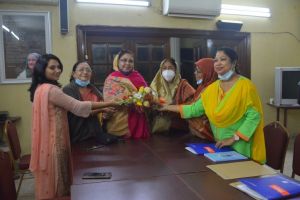 A lobby meeting with the Chairperson of Parliamentary Standing Committee on Ministry of Women and Children Affairs of National Parliament Meher Afroz, MP was held on February 15, 2021 at Awami League Party Office, Dhanmondi, Dhaka.

The meeting was organised to discuss about the inevitability of the ratification of ILO Convention 190 for the elimination of gender-based violence at workplace and to submit memorandum to the Chairperson and two MPs. Member of Parliamentary Standing Committee on Ministry of Primary and Mass Education Shirin Akhter, MP and Member of Parliamentary Standing Committee on Ministry of Labour and Employment Shamsunnahar Bhuiyan, MP; BILS Directors Kohinoor Mahmood and Nazma Yesmin, BILS-CARE Bangladesh Project Coordinator Fariba Tabassum and BILS Information Officer Mamun Or Rashid were present in the meeting.

BILS Director Kohinoor Mahmood explained the urgency of implementing ILO Convention 190 considering the current situation of Bangladesh and the initiatives as well as activities taken by BILS in order to raise awareness among workers while BILS Director Nazma Yesmin highlighted various initiatives taken by government to protest gender-based violence and related laws.

Meher Afroz, MP shared her experience regarding the violence and harassment against women in our society. Considering the current situation, she appreciated BILS and Care Bangladesh for taking this initiative. In the fruitful discussion she defined some way forwards to work effectively with this issue. She assured from her end to raise the issue at parliament in the next assembly. Mentioning the issue as a continuous process of practice she emphasized to work on this until its ratification.