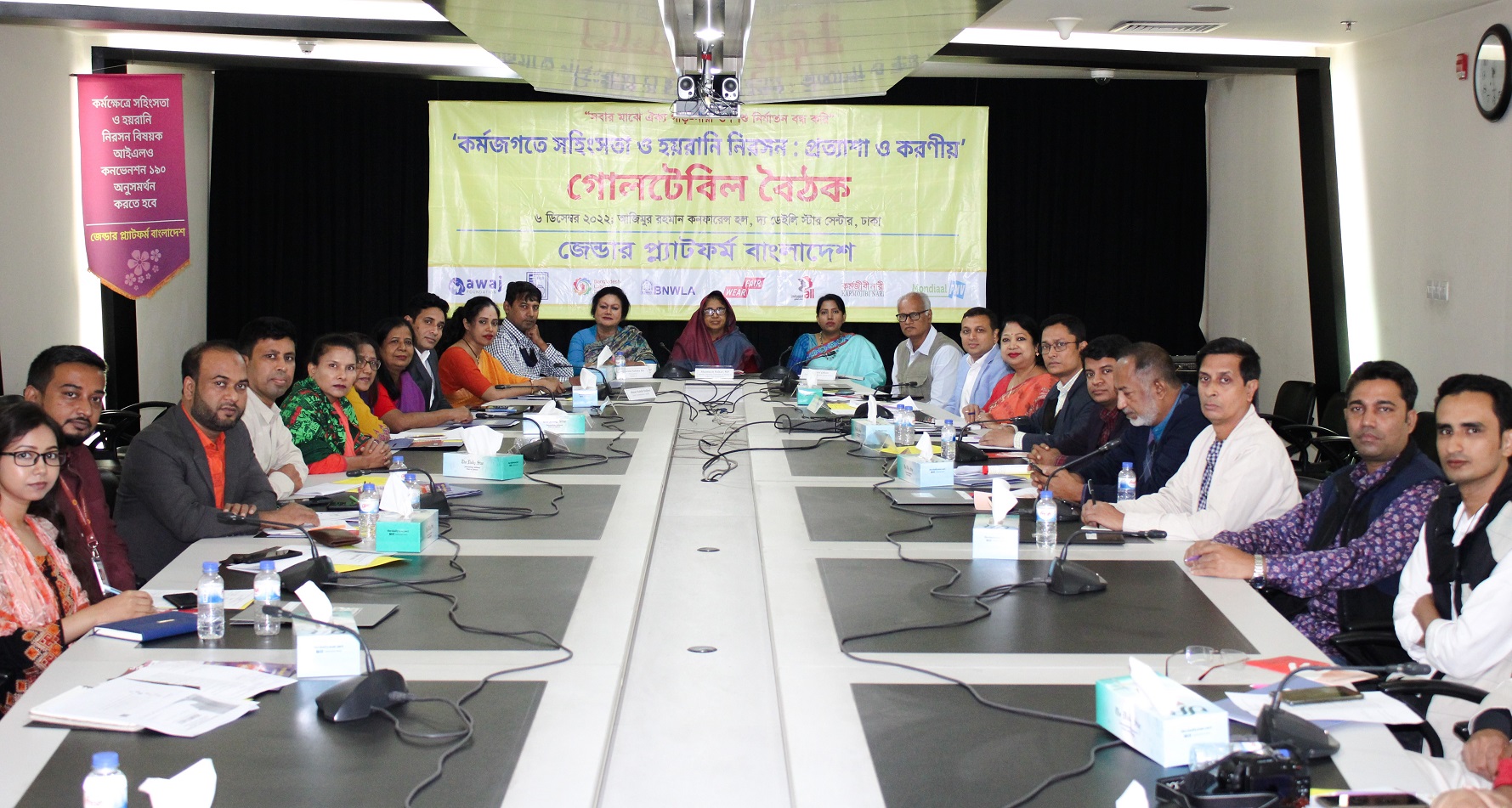 Gender Platform Bangladesh, a coalition of organizations working on labour rights, has called for a “Sexual Harassment Prevention and Protection Act” to end all forms of violence and harassment in the workplace. The speakers made this call at the round table meeting on ‘Reducing Violence and Harassment in the Workplace: Expectations and Actions’ organized by Gender Platform Bangladesh on December 6, 2022 at Azimur Rahman Conference Hall, The Daily Star center, Dhaka on the occasion of 16 Days of Activism against Gender-Based Violence 2022.

Speaking as the chief guest, Shamsun Nahar Bhuiyan, MP said that any form of sexual harassment in the workplace creates hostile conditions which are a clear violation of human rights and one of the obstacles to development. She said that women work hard home home and outside the home but there is no recognition of women’s domestic work. They are harassed and tortured in various ways. Enacting “Sexual Harassment Prevention and Protection Act” is very important to address workplace violence and harassment.

Pointing out that men and women are contributing almost equally in the progress of the economic development of the country, Nusrat Jahan, Deputy Solicitor of the Law and Justice Department of the Ministry of Law, said that there are many good laws in the country and the government is working to implement them. If the law is properly implemented, violence and harassment against women will decrease. In this case, it is very important to change everyone’s mind about following the law.

National Human Rights Commission Deputy Director Sushmita Paik said, the definition of the guidelines of the High Court to prevent sexual harassment says which behaviors are sexual harassment, yet women are constantly being harassed by these behaviors in the workplace. It is very important to change the mindset of everyone in this regard. She said that a child should be raised as a good person from the family. He should know what is good and what is bad.

Referring to ILO Convention 190 as very important for Bangladesh, Bangladesh Employers Federation (BEF) Additional Secretary General Saidul Islam said, there is an opportunity to accept the instructions of High Court as a law to prevent sexual harassment. In this case, everyone’s commitment is absolutely necessary.

In the chaired speech, Advocate Salma Ali said, we have to proceed with zero tolerance policy to prevent violence and harassment against women. In addition to changing the attitude towards women, everyone’s responsibility should be increased.

Sramik Karmachary Oikya Parishad (SKOP) Joint Coordinator Ahsan Habib Bulbul said that every human being has human rights for human development. Women are subjected to sexual harassment at workplace, commuting and other places which hampers their mental development. He said if the working environment is not made safe for the workers, their productivity will be low which will affect the economy of the country as well.

Samajtantrik Sramik Front President Razekuzzaman Ratan said that our dithering has increased the scope of violence. Positive attitude of all can solve this problem. He said that just as awareness is needed, it is absolutely necessary to support the victims. Socially an environment should be created where women are protected and enjoy all the rights. Where there will be no discrimination, violence and harassment.

Other speakers in the meeting said that women are working equally with men in the country and outside the country. Bangladesh’s progress in terms of women’s empowerment and economic development is admirable. But women are still subjected to torture and harassment in all areas. The speakers said that everyone, including journalists, should come forward to prevent torture and harassment in workplaces and educational institutions. In this case, they expressed the opinion that the government can play a stronger role by expanding the definitional scope of the workplace.