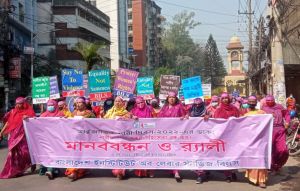 BILS under its’ DGB-BW organized a human chain, Rally, and discussion meeting to mark the International Women’s Day-2022 on March, 8 2022 at Chattogram.

Participants, mostly females from different trade union federations gathered at the premises of Chattogram Press Club and formed a human chain in protest of violence against women and children. It was presided over by BMSF Women Committee Chattogram president Nazma Akter and was conducted by BLF women committee organizer Jannatul Ferdous. Speakers in the human chain said that now-a-days the violence against women of all ages has increased. We have to take proper action against the criminals. In workplace and other places women are being physically and mentally abused. These are needed to be stopped.

Later a rally started from Chattogram press club premises and ended up at the premises of J M Sen Hall Chattogram. 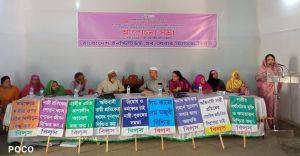 The discussion meeting was addressed among others by Nazma Akter of BMSF, Kohinoor Akter Koli of TUC, Tamanna Binte Azad of BFTUC, Amena Begum of BLF and Munni Akter of BJSF.

Chief Guest and others said Women in our country are playing a pivotal role in all walks of life. International Women’s Day is a great inspiration for all. It encourages us to come forward and fight all the obstacles. If we fail to ensure safety and better opportunity for women, we cannot assure a brighter, democratic Bangladesh-she said.