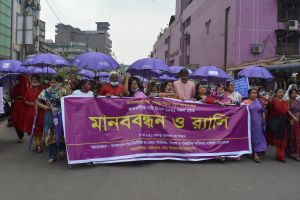 On the occation of International Women’s Day 2021, BILS and different networks organised various programmes in different parts of the country including Dhaka on March 8, 2021, keeping infront of the slogan ‘Women in leadership: Achieving an equal future in a Covid-19 world’

Umbrella Rally, Discussion meeting and Folk song in Dhaka: With the support of International Labour Organisation and Oxfam in Bangladesh, BILS organised an umbrella rally on March 8, 2021 at Muktangon in the Capital. At the same time, a number of folk singers alongwith a well-decorated truck organised by the Campaign for Popular Education (CAMPE) under the Securing Rights of Women Domestic workers in Bangladesh project  performed awareness songs about the Domestic Workers Protection and Welfare Policy, 2015 and the truck toured various areas of Dhaka city.

Underscoring the significance of International Women’s Day, the speakers said that there is no alternative to the struggle to establish women’s rights. Although some rights have been established through struggle, but domestic workers have not yet been included in the labour law. The speakers said that domestic workers live a very inhuman life. They do not have any specific working hours, place of residence, weekly holidays or maternity leave. There is no fixed salary for them. Therefore, besides recognizing domestic labour as a profession, it is necessary to include them in the labour law. 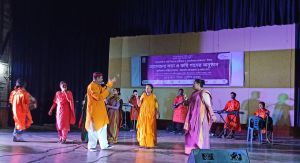 Speakers at the rally demanded the proper implementation of “Domestic Workers Protection and Welfare Policy 2015” for the protection of domestic workers; to provide training at the local level with more emphasis on skill development and language and education for women migrant workers who want to go abroad; to take effective initiatives and implement activities for the social and economic rehabilitation of women migrant workers returning from abroad; to ensure exemplary punishment to the criminals who are responsible for torturing domestic workers, including the proper treatment of abused domestic workers and fair compensation to the families of injured workers and killed workers.

A discussion meeting and Folk Song on domestic worker protection and welfare policy, 2015 organized by BILS’ Securing Rights of Women Domestic Workers in Bangladesh (Suniti Project) at Bangamata Sheikh Fazilatunnesa Mujib Auditorium of the National Museum, Dhaka on that afternoon.

The meeting was chaired by BILS Joint Secretary General Dr. Wajedul Islam Khan, while Member of the Parliamentary Standing Committee on the Ministry of Labour and Employment Shamsunnahar Bhuiyan, MP was present as the chief guest. BILS  Director Nazma Yesmin acted as moderator. The song was performed by Alam Dewan and his team. Hundreds of domestic workers, organisers, trade union leaders, civil society members and representatives of development organizations from different parts of the Capital were present on the occasion.

Shamsunnahar Bhuiyan, MP, said women’s rights are not a favor, they deserve it. Domestic workers are also our sisters or relatives so we have to ensure their rights and dignity. For this, everyone has to work unitedly. Noting that the labour law is being amended, she said an application would be made to the Prime Minister if necessary to include domestic workers in the labour law. 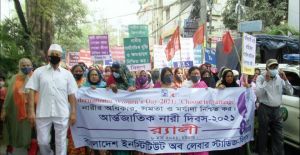 Chattogram: A discussion meeting was held at JM Hall, Chattogram on the role of those concerned in rehabilitating the socio-economic status of the returning migrant women workers. Academician Tahurin Sabur was present as the chief guest at the discussion meeting chaired by BFTUC leader Rekha Rani Barua. ICMPD Country Director Md. Ikram Hossain and BILS-LRSC Chairman A M Nazimuddin was present as special guest. TUC Chattogram District President Tapan Dutta and BILS Deputy Director M A Mazid also spoke on the meeting. In addition, women’s gatherings and rally was held at the city’s Press Club premises to ensure women’s rights, equality and dignity. BILS LRSC Chairman  AM Nazim Uddin led the rally while hundreds of women workers and trade union leaders participated in the rally.

Manikgonj: BILS Organised a discussion meeting and human chain in Manikgonj. Speakers in the human chain demanded to provide training at the local level with greater emphasis on skills development and language education for women migrant workers who want to go abroad and to take effective initiatives and implement activities for the social and economic rehabilitation of women migrant workers returning from abroad.