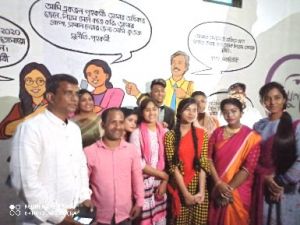 BILS with the support of Oxfam Bangladesh organized a half day event of the occasion of International Women’s Day 2020 on March 15, 2020 at Monipuripara, Tejgaon, Dhaka.

An art competition was organized for the school going children, along with a discussion meeting with the community people to raise awareness regarding domestic workers’ rights and a street drama focusing on the vulnerabilities and claims of rights of the domestic workers.

The event ended with a street drama which demonstrates the situation of violation of Rights and the role of a domestic worker to a city dweller family with a view to create a positive image of the workers towards the community people.