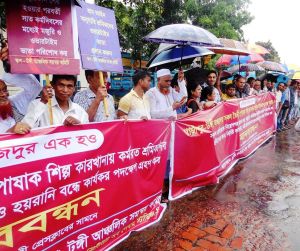 Sramik Karmochari Oikya Parishad-SKOP, with the support of BILS  formed a human chain on October 20, 2017 at in front of Tongi Press Club for taking initiatives to stop hijacking and harassment on the way to the workplace of all the workers working in RMG factories at Gazipur-Tongi area.

Another human chain was formed on the same date and same place for providing appointment letter to all the workers, paying wages and extra overtime allowance, ensuring particular working hour, maternity leave and bonus for women workers working working in RMG factories at Gazipur-Tongi area according to Labour Law .