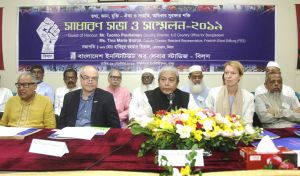 The election session was chaired by Shah Mohd. Abu Zafar, Chairman and attended by Quamrul Ahsan and Shahida Parvin Shikha, Members of Election Committee. As there being only one candidate for each positions of the Executive Council, the Chair declared all 29 Candidates including Md. Habibur Rahman Shiraz as Chairman and Nazrul Islam Khan as Secretary General elected unopposed. 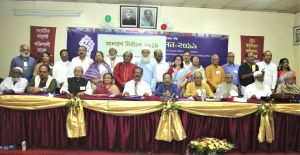 Speakers at the meeting lauded the progress made by the BILS on the rights and labour issues appreciating its role in organizing workers particularly of the informal sector. They hoped that in the coming days, BILS would make relentless efforts to regain the rights of the working people and in this case the solidarity of the government, employers and other organizations would continue.

Four parallel workshops were also organized between the interval of General Meeting and Election. Participants of the workshop titled, “Roles of BILS and Trade Unions to address the Challenges of Technological Evolution” opined to develop the ICT based capacity and awareness of Trade Unions in a view to deal with the impact on workers due to 4th Industrial Revolution. They emphasized on training, research, advocacy, alternative employment, using social media for empowerment, collecting relevant information from other countries and forming TU special committee to address the challenges of 4th Industrial Revolution.

BILS Members participated and delivered their opinions and recommendations in three other workshops titled “Analyzing Relevant Trade Policies to Ensure Employment, Inclusive Development and Decent Work: Roles of BILS and Trade Unions”, “Roles of BILS and Trade Unions to Ensure Decent Work at Workplace” and “Present Situation of Livelihood and Organizing Capacity of Workers-Employees of Six Sectors in Chattogram: Dues toward Development”.

During the closing session, the newly elected Executive Council was assembled on the dais, while the general assembly greeted them with hand clapping and standing ovation. The Secretary General Nazrul Islam Khan thanked all concerned for their support and cooperation in the past and expected continuation in the future. Thanking everyone for their sincere effort in successfully organizing this event, the Chairman Md. Habibur Rahman Shiraz declared the AGM closed.