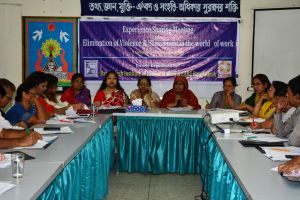 An experience sharing meeting jointly was organised by BILS and Care Bangladesh on July 31, 2019 at BILS Seminar Hall, Dhaka in a view to assist the formulation of the ILO Convention and recommendations for prevention of violence and abuse against women at workplace. The meeting was chaired by the President of Women Committee of Jatiya Sramik League Rowshan Jahan Shathi, while BILS Joint Secretary General and Executive Director Md. Zafrul Hasan, Director Kohinoor Mahmood, Nazma Yesmin and a number of TU leaders spoke among others.

Government, employers and labour representatives from Bangladesh participated in the ILO’s 108th International Labour Conference for the prevention of violence and torture against women at workplace. The government and labour representatives played a positive role in case of adoption of the convention and the recommendations. The meeting was organised to exchange experiences on adoption of The Violence and Harassment Convention (190), 2019 , and Violence and Harassment Recommendation (206), 2019.