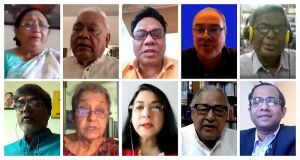 After the profound impact of the COVID-19 pandemic on the global economy, particularly on the world of work during the first half of 2020, a significant part since then has been struggling for rebounding and recovery. The major struggle has been confronted by different worker groups, including regular, temporary, and casual workers and small-scale employers, particularly those self-employed and involved in MSMEs, retailing, construction, road, commerce, tourism, and other informal sectors. The scenario is not different for Bangladesh. Trade union policy strategy should focus on the world of work, particularly highlighting the workers of those who are organised and unorganised. Effective social dialogues will be the key for recovery of the labour market during COVID-19.

These observations emerged at the virtual dialogue on Recovery of the Labour Market during COVID-19: Role of Trade Union. The dialogue was jointly organised by the Centre for Policy Dialogue (CPD), and Bangladesh Institute of Labour Studies-BILS was held on Saturday, 17 April 2021.

CPD Executive Director, Dr Fahmida Khatun and BILS Secretary-General & Executive Director Nazrul Islam Khan delivered the introductory remarks at the dialogue. They remarked that the rebounding and recovery of the world of work particularly those of workers and employers have been supported mainly by different public policies and interventions. These public policies and employers’ actions have been primarily influenced by the active participation of the trade unions. Like other countries, trade unions in Bangladesh have played an active role both in humanitarian issues and workers’ rights issues during this crisis period. A detailed review of their activities would help understand the nature and extent of their engagement, their capacities in influencing national and international policies and employers’ activities, as well as the gaps in activities where further engagement is expected in the future. In this backdrop, this study has revisited the role of trade unions in Bangladesh during the pandemic period to identify a set of policy proposals for influencing the process of sustainable recovery of the labour market.

CPD Research Director Dr. Khondaker Golam Moazzem, made the keynote presentation at the dialogue and said that different tripartite discussions and negotiations that have been undertaken during this crisis period had ensured limited success in favour of workers and MSMEs regarding coping with the risks and rebounding and recovery from the crisis. Workers’ health and safety are in a vulnerable state due to the second wave of the pandemic. There is a need for tripartite discussion and a joint statement on ensuring the interest of workers through implementing the long-term policies. Based on the national social Safety Net strategies, trade unions need to identify various support measures required for workers and their families under the provisions of social security for the working-age people, socially excluded groups, a food transfer programme, protection for disabilities and affordable healthcare. Government, employers and other stakeholders should work together to sign agreements related to international labour and human rights.

Guest of Honour at the dialogue Ministry of Labour and Employment Secretary K. M. Abdus Salam mentioned all stakeholders are heard with equal importance and monitoring is taking place regularly through the central monitoring committee.

ILO Bangladesh Country Director Tuomo Poutiainen also joined the virtual dialogue as the other Guest of Honour. Tuomo Poutiainen remarked that the government should focus on providing social safety net to labours in both formal and informal sectors.

The Special Guest Member of the Parliamentary Standing Committee on Ministry of Primary and Mass Education and BILS Vice Chairman Shirin Akhter, MP, reiterated the need for continued social dialogue with the participation of all. She also called for increasing the number of enlisted organised labours.

Tripartite coordination is vital to reduce communication gap among stakeholders, said the Chair of the session and CPD Board of Trustees Treasurer and Former Advisor to the Caretaker Government and Chairman, Apex Group Syed Manzur Elahi, opined that it is the responsibility of the government to organise participatory social dialogue.

Eminent Researcher, Human Rights Activist and Former Chairperson, Ain O Salish Kendro (ASK) Dr. Hameeda Hossain, raised the sufferings of the workers to commute to the factory during the lock-down period due to lack of transport facilities which are supposed to be arranged by the employers as per the instruction of the government.

Presentation on Impact of COVID-19 on the Labour Market, Policy Proposals for Trade Union on Employment, Gender and Social Security for Sustainable Recovery