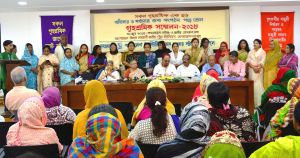 Speakers in the conference said that domestic workers right is a human right, but this right is being violated at present in everywhere. The level of torture on domestic workers is increasing which occurring all brutal killing. Government has already declared ‘Domestic Workers Protection and Welfare Policy-2015’. In this case, it is necessary to bring the policy under Labour Law-2006 for protesting torture on domestic workers and ensuring their human dignity, they mentioned. Besides, they urged to government for ratifying ILO Convention 189 regarding decent work for domestic workers. In the conference they demanded to ensure domestic workers protection and welfare as well as to establish their allover dignity, to stop torture and any kind of violence and to ensure fair wage, compensation and decent work through the implementation of ‘Domestic Workers Protection and Welfare Policy-2015’. Keeping in mind the dignity of domestic workers, the speakers urged not to address them as ‘Bua’.