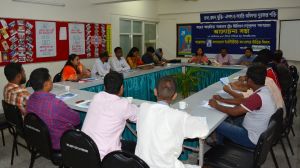 A discussion meeting with the participation of Trade Union Leaders at Savar-Ashulia area was organised by BILS on October 17, 2017 at BILS Seminar Hall. Main objectives of the meeting were to present the keynote paper of organised opinion sharing meeting on September 21, 2017, to take and finalize the programmes observing five years of Tazreen Garments fire accident.