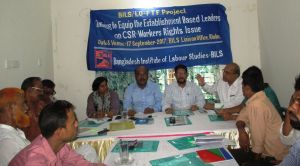 Main objectives of the meeting were to involve the owners authority and leaders of Trade Union Federations Khulna region with CSR activities and to discuss about BILS CSR activities.