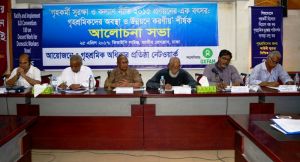 Recently, BILS prepared a report on Domestic Workers humiliation and accident of 2016 based on a survey monitoring of 11 national Dailies.