On the occasion of 16 Days of Activism against Gender Based Violence 2021, a human chain was held on November 28 , 2021 at the office of the Commissioner, Ward No. 36, Madhubag, Magbazar. The event was jointly organized by Bangladesh Institute of Labour Studies- BILS and Campaign on Popular Education (CAMPE) under Suniti Project run in cooperation of with Oxfam in Bangladesh and Global Affairs Canada. 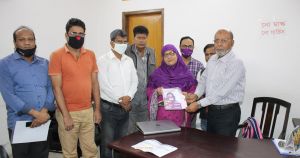 After the human chain, a meeting was held with the dignitaries of the area in the presence of Nasimul Haque Kusum, Vice President, Mirbagh Society to create awareness about the abuse of domestic workers and to prevent torture. During the meeting, various advocacy materials of the Suniti project were handed over to the the Vice President with a view to share it with the Commissioner. They were informed about the activities of the project and were invited to visit the training center of the Suniti project where Bachchu Mia Gazi, former GS of Abujar Gifari College Student Union, Md. Yousuf Al-Mamun, Project Coordinator of BILS, Chowdhury Borhanuddin, Senior Advocacy Officer, Kamruzzaman Fahim, Monitoring Officer, Moksedur Rahman, Programe Officer, CAMPE etc. were Also present at the meeting.