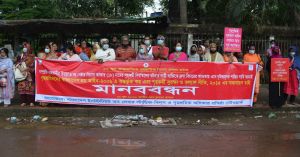 Trade union leaders and civil society representatives called for end to violence against domestic workers, exemplary punishment for torturers, including legal protection, proper treatment of victims and appropriate compensation. The demand was made at a human chain and protest meeting held in front of the National Press Club on June 16, 2021. Domestic Workers Rights Network-DWRN organised the human chain and protest meeting.

Speakers at the human chain and protest meeting said that recently (June 11, 2021) a domestic worker named Niasa Akhter (18) was tortured in a house in Sector 9, Uttara, Dhaka. They said, incidents of torture, killings, and human rights abuses against domestic workers have risen alarmingly in recent years. In such a situation, International Domestic Workers’ Day is being celebrated today. The speakers said that just as they have some fair rights as domestic workers, they also have the right to dignity as human beings. During this COVID-19 period, domestic workers did not receive much help or support from the public and private sectors and a large number of them were laid off and unemployed. As a result, it has become difficult for them to survive. Such incidents of violence and torture against them in such situations are extreme signs of inhumanity.