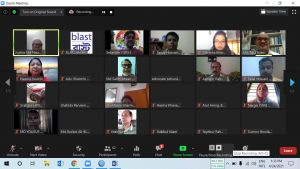 Trade union leaders, labour law experts and civil society representatives called for amendments to the labour law, keeping in mind the disaster-era period of learning from the Rana Plaza collapse. This was stated by the speakers at the virtual meeting on “Protection of workers in times of disaster: labour laws and other regulations” jointly organised by Bangladesh Legal Aid and Services Trust-Blast, Safety and Rights Society-SRS, Bangladesh Institute of Labour Studies-BILS and Sramik Nirapotta Forum-SNF on commemorated the eight years of Rana Plaza collapse on April 24, 2021.

In his speech, Chief Legal Adviser of Blast and former Judge of the Appellate Division of the Bangladesh Supreme Court Justice Nizamul Haque Nasim, said that the safety of the workers is very important in dealing with the COVID-19 pendamic. Everyone needs to think about how to help workers when they are in danger. He said the cases would have progressed and the workers would have got something if Rana Plaza had handled the cases by forming a team to handle the cases in the High Court. He called upon all to work in unitedly so that the workers get their fair share in the days to come.

BILS Vice Chairman Shirin Akhtar, MP, said that all should work together to resolve the existing problems of labour law in a tripartite initiative. For this, special importance should be given to the exchange of information. She said the government needs to monitor whether the incentives are reaching the right people. She called upon all to come forward in building a humane society.

Trade Union Kendra General Secretary Dr. Wajedul Islam Khan, said that considering the health risks of the workers, the former labour welfare centers should be set up as health centers and the treatment of workers through experienced doctors should be considered. He demanded that making a factory-based workers list for giving COVID vacine.

Department of Inspection of Factories and Establishments (DIFE) Legal officer Md. Masum Billah, said the government has announced various incentive packages for the workers in the light of international standards during the COVID-19. Noting that an initiative has been taken to provide cash assistance to the needy workers in the readymade garments, leather and footwear industries, he called upon all to come forward to make it more universal.

Labour Court Bar Association President Selim Ahsan Khan, said the Rana Plaza accident and the extreme COVID-19 situation should not be seen together, the two are completely different. He opined that different laws are needed to deal with man-made and natural disasters. At the same time, he mentioned various errors in the labour law (layoffs, lay-offs, etc.) and demanded that steps be taken to amendment them.

Referring to the Constitution and the provisions of the Labour Act Safety and Rights Society Executive Director Sekendar Ali Mina, said in the key article that Rana Plaza Accident Day is now established as a day for the rights of working people. He noted that workers are joining the regular work even in the face of the risk of COVID-19 infection, as if their livelihood seemed to be greater than their lives. He said it was important to strengthen the health and legal protections of workers in the current COVID-19 situation. Strengthening the legal protection of workers in times of disaster requires social protection as well. In this time he make some recommendation for workers that the scope of social security for working people should be increased, specialized hospitals should be set up by the industrial owners and medical treatment should be provided on an emergency basis, action should be taken according to the declared disaster status, amendment of labour law and rules, health awareness training should be provided to workers.

Other speakers noted that workers were deprived of legal protection during disasters, and called for a new chapter to be added to the Labour Law by forming a committee with representatives from the tripartite committee. At the same time, on the pretext of coronation, they demanded that the workers should not be fired, the factory should not be laid-off and the workers should be included in the social safety net.