The main objectives of the trainings were to inform and discuss with Trade Union leaders about Right To Information act 2009, to discuss about the process of getting information from specific sectors and activities when information is not available according to demand and to utilize Right to Information Act in a view to protect rights of Trade Union and workers and establish justice for them. 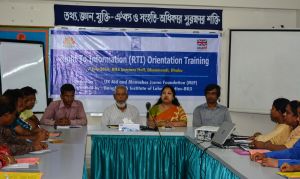 These trainings were organised to provide practical lesson for making leaders enable to practice this act for their necessity and empowerment.

Training programme for each day were divided into five sessions, where introduction to RTI, using of RTI, salient features of RTI Act-2009 and finding out strategies on using of RTI Act-2009 among the stakeholders were discussed. A group work followed by an evaluation was also included in a session.