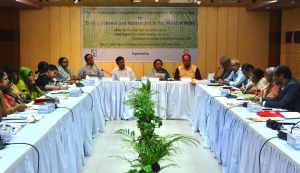 BILS and Care Bangladesh jointly organised a consultation with multi-stakeholder on ILO Convention titled “Ending Violence and Harassment in the World of Work” on May 23, 2018 at A S Mahmud Conference Hall, The Daily Star Center.

Taking recommendations from the concerned people and defining future activities to stop violence and harassment at workplace were the main objectives of the meeting.

A keynote paper titled, “Reducing violence and harassment in the world of work:  Policy position” was presented by Care Bangladesh Director-Women and Girls Empowerment Humaira Aziz where she said, the importance of global value chains and their impact on the conditions faced by the workers, not only in formal situations but also throughout the value chain, must be addressed in the instruments. Citing examples of garment sector, she said complexity in the supply chains adds to the risk of poor conditions for the workers, also including violence and harassment.

Ministry of Labour and Employment Additional Secretary Khondaker Mostan Hossain said 127 countries will attend this year’s ILO conference where Bangladesh government will try to raise its labour related issues. Bangladesh made significant progress in improving workers’ condition and emerged as a labour-friendly country, he said. He stressed the need for changing mindset to tackle workplace harassment.

Care Bangladesh Country Assistant Director Prabodh Devkota said, any types of violence including sexual, mental, cultural and physical have negative impact not only on the workers but also on their families and productivity. He added that women, who had significant contribution in the production are the worst sufferer of sexual harassment in workplace and it should be stopped. Commitment from policymakers will be required to tackle workplace harassment, he said.

Jatiya Sramik League President Alhaj Sukkur Mahamood said Industrialists do not want to understand the law, they do not want to accept the law. He added, owners decided what to say in the ILC meeting.

Samajtantrik Sramik Front General Secretary Razekuzzaman Ratan demanding ILO Convention on the issue said that it would create pressure on the government and create public awareness.

Discussants in the meeting recommended to