Domestic Workers Rights Network-DWRN, with the support of BILS organised a consultation meeting with the participation of concerned parties at divisional level for the implementation of Domestic Workers Protection and Welfare Policy 2015 on June 7, 2017 at Indutrial Relation Auditorium (IRI), Tongi, Gazipur.

The meeting was organised aimed at relating the concerned parties at divisional level, taking their opinion and recommendations and fixing outline and strategy for future programme. 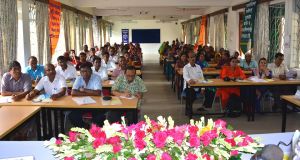