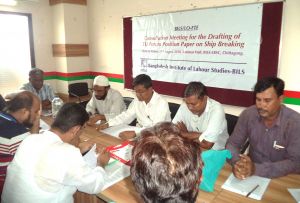 In the consultation, national laws and regulations on ship breaking were the focal discussion issues. Besides, existing trade union scenario, OSH situation, role of the stakeholders were also discussed in the meeting.   SBWTUF leadership unanimously agreed to add the followings in the TU position paper yet to be finalized.

Discussants in the meeting recommended to enhance pro-activeness of environment directorate and the department of explosives officials of DIFE in case of implementing labour and environment laws and rules in ship breaking sector, to clarify the formation and function of one stop service in this sector, to prepare a customized guideline for ensuring workers safety, to ensure free and fair Trade Unionism in this sector, to take steps for modernizing the existing yards and banning the illegal allotments to form new ship breaking yards, to shift this in dry docks in near future.