Conference on women and informalisation of work 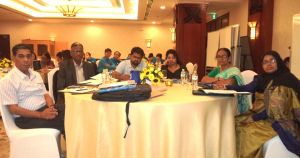 As part of the Asia Regional Activity  2018, in cooperation with the DGB Bildungswerk, the Vietnam General Confederation of Labour (VGCL) organized a five day conference titled, “Women and Informalisation of Work: A Future Search” on October 7-11, 2018 in Ho Chi Minh City,Vietnam. The conference was organised aiming to co-create future scenarios for women workers in Asia and the world and the response of trade union movement and to discuss best practices and reshaping future work strategy.

The conference basically focused on the existing scenario of female workers, barriers and way-out in the informal economy and the process of informalisation of work in Asian regions. The focus of the discussions were on how to ensure empowerment of women, bringing women and youth leadership in the fore-front. The conference discussed on various topics. Speakers in the programme presented and shared their national level experiences regarding women and youth issues. They also discussed on the current challenges and ways to overcome these.