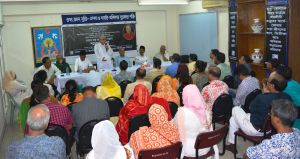 Mentioning the vital role of Roy Ramesh Chandra for establishing workers’ rights, leaders in the meeting said that he was devoted to the welfare of country as well as society. Recalling his working life, speakers said that he had always stood beside the workers during their crisis and worked for the workers welfare.

It is to be mentioned that veteran trade union leader with international reputation Roy Ramesh Chandra died on May15, 2019. He was 68. He left behind his wife, one son and one daughter.