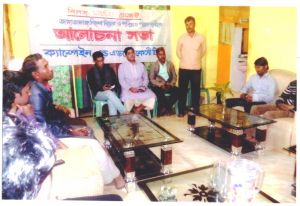 Discussants mainly emphasized on the importance of ID card and appointment letter for the ship breaking workers. They said that ship breaking workers are working in a very unhealthy and risky working environment. They are deprived of proper wages, leave and other legal benefits. Most yard owners do not provide personal protective equipment to the common workers, for which, accidental injuries and death are rampant in this sector.