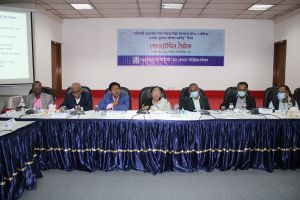 Speakers at a roundtable called upon all to come forward for the improvement of social security and living standard of rickshaw workers in Dhaka city as during the COVID-19 pandemic they lived helpless life and were deprived of adequate assistance and cooperation. The roundtable titled “Life and Livelihood of Rickshaw Drivers in Dhaka City at Lockdown: Future Action for Effective Safety” was organised by Bangladesh Institute of Labor Studies-BILS on December 28, 2021 at CIRDAP Auditorium in the capital.

Speaking as the chief guest, Member of Parliamentary Standing Committee on the Ministry of Primary and Mass Education and BILS Vice Chairman Shirin Akhter, MP, said, this year the nation is celebrating the golden jubilee of independence but it is unfortunate for all not to talk about improving the quality of life. She said the total development of Dhaka city is not possible avoiding rickshaws. She called upon the authority to come up with a list of rickshaw pullers with a view to improve their living standards and stop harassment and torture.

Presenting the main article Jagannath University Professor of Social Work Md. Rezaul Karim mentioned that rickshaw workers are one of the 87% workers of informal sector in the country. According to BILS research, there are about 1.1 million rickshaws in Dhaka city and about 2.2 million rickshaw pullers and their families depend on the rickshaw sector. Meanwhile, more and more new people have become involved in the rickshaw pulling profession during the COVID-19 period. He noted that the income of rickshaw pullers had dropped by about 50 per cent in the two-term lockdown in the country. Where earlier the daily income was 500 taka, it was reduced to 250 taka in lockdown. Due to the declining income of rickshaw workers in the lockdown, many have taken out loans to support their families.

Mentioning the inclusion of rickshaw pullers in building a dignified and democratic state, Jahangirnagar University Professor of the Department of Urban Planning Dr. Adil Mohammad Khan said that, rickshaws are the vehicle of common people; therefore rickshaw drivers should be respected. Stopping rickshaws without alternative employment is not a solution. It is needed to bring them into the mainstream without uprooting them. He said that besides determining how many rickshaws will run in any area of ​​Dhaka city, there should also be a plan of who will drive rickshaws there.

Sramik Karmachary Oikya Parishad (SKOP) Joint Coordinator Quamrul Ahsan said, the government had set up 23 crisis management committees across the country during the COVID-19 pandemic period. Their responsibility was to compile a list of workers affected by the COVID-19. But so far no effective action has been taken. Although the list was provided by the trade unions, many workers did not receive any assistance. He said, nine demands had been made by the SKOP, but there had been no discussion on those.